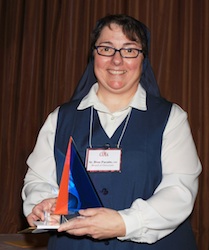 On 28 February 2010, the Catholics in Media Associates (CIMA) honored Sr. Rose Pacatte, Daughter of St. Paul, by conferring on her its 2010 Board of Directors Award. CIMA president Jane Abbott said:

?The CIMA Board of Directors honors Sr. Rose Pacatte, FSP for her leadership role in the world of media literacy and for her passionate advocacy of media projects which illuminate the complexities and challenges of the human condition. CIMA also cites Sr. Rose?s significant contributions as an author, columnist, film reviewer and presenter, and her tireless efforts as a Catholic panelist on some of the world?s most prestigious film festival juries, including Toronto, Venice and Berlin.?

The CIMA Awards were created in 1992. Their purpose is ?to promote and applaud individuals, films and TV programs that uplift the spirit and help us better understand what it is to be part of the human family.?
Sr. Rose, Director of the Pauline Center for Media Studies (PCMS), has been involved in media, from publishing to filmmaking, since she entered the Daughters of St. Paul more than 40 years ago. She has served on ecumenical and Catholic juries at the Venice, Locarno, and Berlin Film Festivals. In 2008 she was the president of the SIGNIS (Catholic) jury at Venice. She also served on the jury for short films at the Newport Beach Film Festival in 2006. Since 2000, Sr. Rose has been co-director of the National Film Retreat and has taught film and spirituality courses at LMU, Saddleback College, and the University of Dayton. Our warmest congratulations to Sr. Rose. 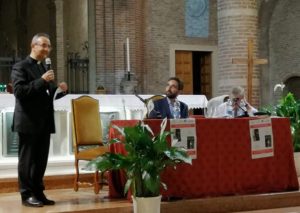