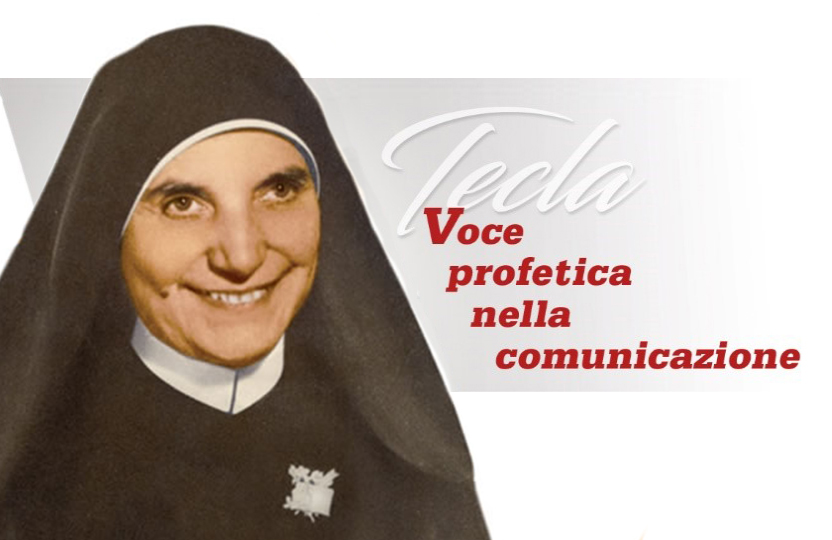 As we prepare to celebrate the 55th anniversary of M. Thecla’s birth to heaven, I think it would be wonderful to take a look at our Mother so as to learn from her, feel her close to us, and receive light and encouragement from her experience. Maestra Thecla was a woman capable of profound communication, of creating communion and enthusiasm even in very difficult situations. Let us listen to one of the many testimonies about her, this one from Sr. Elena Ramondetti (1909-1999), who left for China on 8 January 1937:

When I left for China with [two] other sisters, Maestra Thecla accompanied us to the station and when it was time to say goodbye she hugged me with such warmth that even today I am deeply moved when I recall that moment. That same day, she sent me a letter brimming over with affection and maternal advice: she recommended above all that we love one another, that we remain faithful and united to our superiors, that we form a community of love and that we become saints. From 1937-1941 (when World War II began), she followed us regularly through her letters, ever-solicitous about our health. She advised us to study the Chinese language well and insert ourselves gradually into our new environment (and later into the Filipino context), so as to be able to carry out the apostolate better.

My first trip home from the Orient took place 10 years later. Once again I was able to see Prima Maestra, who had personally traveled to Naples to meet us. With great maternal concern, she asked me how the trip had been and how we had been during the long war years, ending [our conversation] with the words: “The Blessed Mother saved you all; be grateful and try to love her very much.”

I also remember how punctually M. Thecla answer the letters she received. During the war years (from 1941 until about mid-1945) communication [between Italy and the Orient] was not possible so Maestra Thecla did her best to send her letters to us through our sisters in the United States. When communication was re-opened between Italy and the Far East, she did not fail to answer even a single letter of mine up until her final illness. Her letters were precise and concise, answering and clarifying every problem with just a few words.

I was particularly struck by Maestra Thecla’s humility and great faith. When I returned to India after a few months in Rome, I found a note from her in my purse. It read: “Thank you for coming and forgive me if I was abrupt with you…. You know that I love you.”

When Fr. Alberione and Maestra Thecla came to visit us in Bombay in 1955, we were living in a very small house. Primo Maestro immediately said that we needed a bigger one. M. Thecla replied, “Yes but we don’t have the means.” Fr. Alberione gave her a serious look and said: “And faith? Is it possible that you are still reasoning in such a human way?” She humbly accepted his observation, thanked him, and later told us: “Did you hear what Primo Maestro said? We must have faith!”

I was amazed at [Prima Maestra’s] clear-sightedness and prompt adherence to [Primo Maestro’s] ever new and risky requests concerning our vocation in the Church. She, who was always so simple and self-effacing, would take on a decisive, purposeful and courageous attitude that deeply impressed me. I saw that she was always sustained by faith and by fidelity to the charism of the Founder. It was precisely because of this attitude of hers that not a few works were begun: the radio apostolate, the commitment to producing and diffusing records, the preparation and holding of a vast range of catechetical and biblical missions. Statement like “We must do good… As long as good is being done…” were a constant refrain with her.

How many things our Mother taught us! Let us continue to pray to her and ask her to intercede for us. Let us imitate her faith, humility and apostolic zeal. Let us make known the small and big graces that we have witnessed in every part of the world and let us help others get to know her prophetic words, which today continue to proclaim the glory of God. 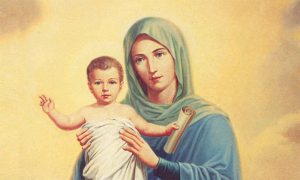 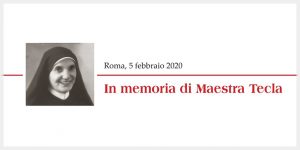 In memory of Maestra Thecla 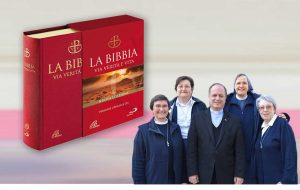 Indiction of the Biblical Year of the Pauline Family 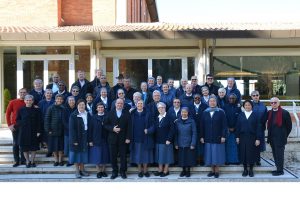 Christmas greetings from the General Government